A repost of the Nanaimo Bars recipe I first posted in 2009. It's a modification of the City of Nanaimo Official Recipe. This time with more pictures! 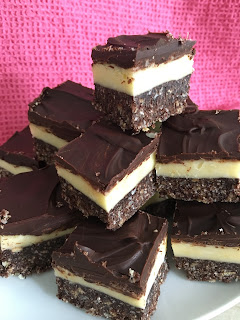 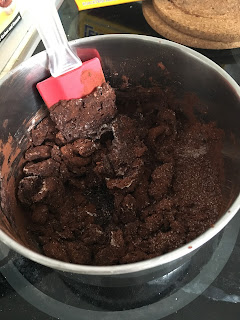 Step 1: In a medium saucepan on low heat melt together 1/2 cup butter, 1/4 cup sugar and 5 tbsp cocoa powder until it becomes a liquid. Stir almost constantly. 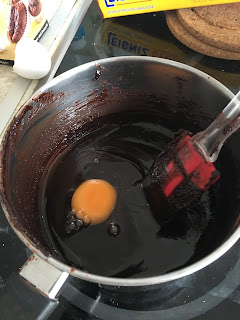 Step 2: Beat in 1 egg and stir constantly until the egg cooks and mixture thickens. 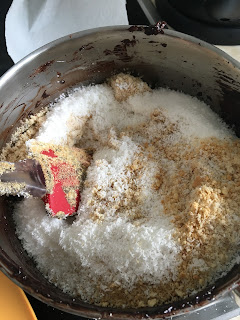 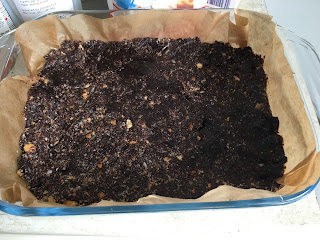 Step 4: Press mixture into an 8"x8"x2" (or equivalent) pan. I usually line the pan with parchment paper for easier clean up but it's not required. Then pop the whole thing in the fridge while you work on the next step. 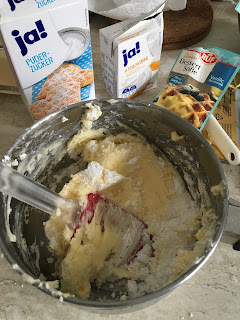 (Note: This step should probably be done in a proper mixing bowl rather than a sauce pan but I don't currently possess any mixing bowls so it is what it is) 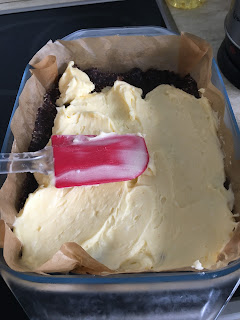 Step 6: Spread the custard over the crust. Try not to get crumbs from the crust into the custard. Then put the whole thing back in the fridge. 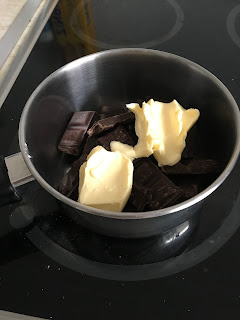 Step 7: Melt together 8 oz chocolate and remaining butter (3 tbsp). I usually do this in a microwave, in 30 second increments, stirring after each. But right now I don't have a microwave so I did it on the stove on low heat. 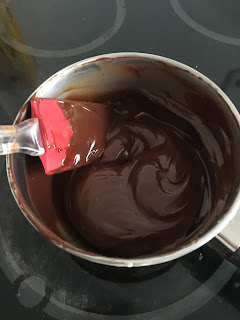 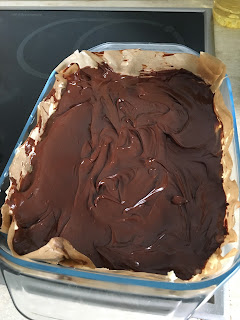 Step 9: Spread chocolate over custard. Try not to mix the custard with the chocolate too much. Then refrigerate until chocolate is set, 4-6 hours or overnight. 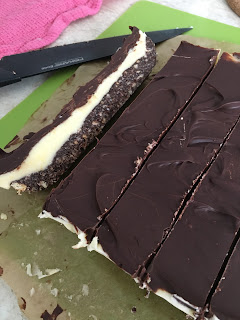 Step 10: Cut into squares. I try to make them small, maybe 1"X1" because they are very rich. 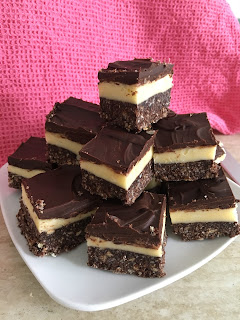 Posted by TheSweetEngineer at 4:03 AM No comments: 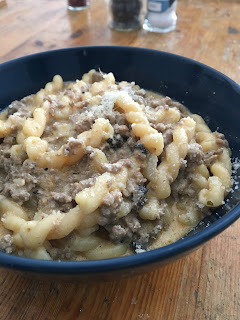 This is a really nice One Pot Ground Beef Stroganoff recipe made entirely from scratch with no Cream of Mushroom soup.

Slice mushrooms. Dice onion. Mince garlic. Melt butter in large pot on medium-high heat. Add in mushrooms and onions and saute 5-6 minutes. Add garlic and saute 1 minute more. Add beef and cook through, approx 6-8 minutes. Drain grease. Add in salt, pepper and paprika. Stir well. Pour in beef broth and half and half. Stir in noodles until all is well combined. Cover and reduce heat to low. Simmer 20-25 minutes until pasta is cooked, stirring occasionally. When pasta is cooked to taste, remove the pot from heat and stir in sour cream. Serve with parmesan cheese and parsley.

Posted by TheSweetEngineer at 12:44 PM No comments: 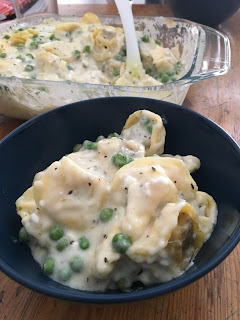 This was one of my favourite meals growing up and is very much a comfort food now. Plus! All the ingredients are easy to find in Germany.


Preheat oven to 350 F. Grease an 8 cup casserole dish. Cook tortellini as per package directions. Place peas in bottom of colander and drain pasta over peas. Place pasta and peas in casserole dish.

Melt butter, mix with basil and garlic. When garlic starts to cook, add in milk slowly. Then sprinkle in flour and whisk until thick. Remove from heat. Stir in cheeses. Pour cheese sauce over tortellini and peas and mix in well. Bake uncovered for 25-30 minutes until bubbling.
Posted by TheSweetEngineer at 10:56 AM No comments: 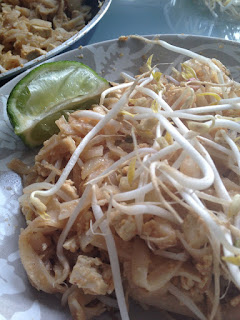 Well, once again it has been more than a year since my last post. In that past year, two important things have happened a) I got married and b) I moved to Germany because that is where my husband works. Because of these things I've had to make some adaptations to my cooking and baking routines. Some ingredients I use at home are either hard to find here and/or significantly more expensive, particularly spices, baking soda and anything Mexican-food related. Plus it's interesting to try and find all your usual ingredients when you don't speak the language. But I'm managing!

Cooking with another person's opinions in mind is also a new challenge for me. Fortunately, my husband and I are very similar in in tastes for a lot of things and I'm the more picky of the two of us anyway. One of my husband's favourite food's though, is Pad Thai. I had never had it before I met him and now it's one of my favourite dishes as well! This is the recipe that we use, which we got from my husband's father and his wife.

1) With this recipe it is very important to have everything ready and within reach before you actually begin cooking. So, start by soaking the noodles according to the package directions. (Usually 20-30 minutes)
2) While the noodles are soaking, chop up the tofu into small cubes. Also dice the onion, mince the garlic and chop/crush the peanuts as needed. If you are using frozen shrimp you will probably also want to thaw it at this point as well
3) When ready, heat the oil in a pan or wok at medium heat. Then add the onion and garlic. Cook until the onions turn clear
4) Add the noodles with a small amount of water (2-3 tbsp) and the soya sauce. Cook until these soften, stirring constantly so that they don't stick to the pan
5) Add the tofu and shrimp (or chicken or pork) and heat while mixing thoroughly with the noodles
6) Clear a space in the middle of the pan to break the egg into. Scramble the egg in the pan and then when it starts to look cooked, mix in with the noodles
7) Add in the fish sauce, brown sugar, tamarind paste, bean sprouts and peanuts. Stir until well mixed and heated through
8) Serve with fresh squeezed lime juice and more bean sprouts

A few notes about this one, we always double the recipe to make enough for the two of us (plus some leftovers!) but we have to do it in two batches (following steps 3-7 twice) and then mix the batches together in the end because we only have a small pan. We also tend to use more protein than the recipe calls for here. Also, we use more 'sauce' than the original recipe, so if you make it and think it's too strongly flavoured you might want to give it another try but reducing the amount of fish sauce/brown sugar/tamarind paste. Finally, we've found that this is definitely a recipe that works best if you have two people to work on it together. This way one person can constantly stir the noodle mixture while the other measures/adds ingredients. Overall though, it's not as complicated as it looks and it's super tasty!

Posted by TheSweetEngineer at 2:06 PM No comments: 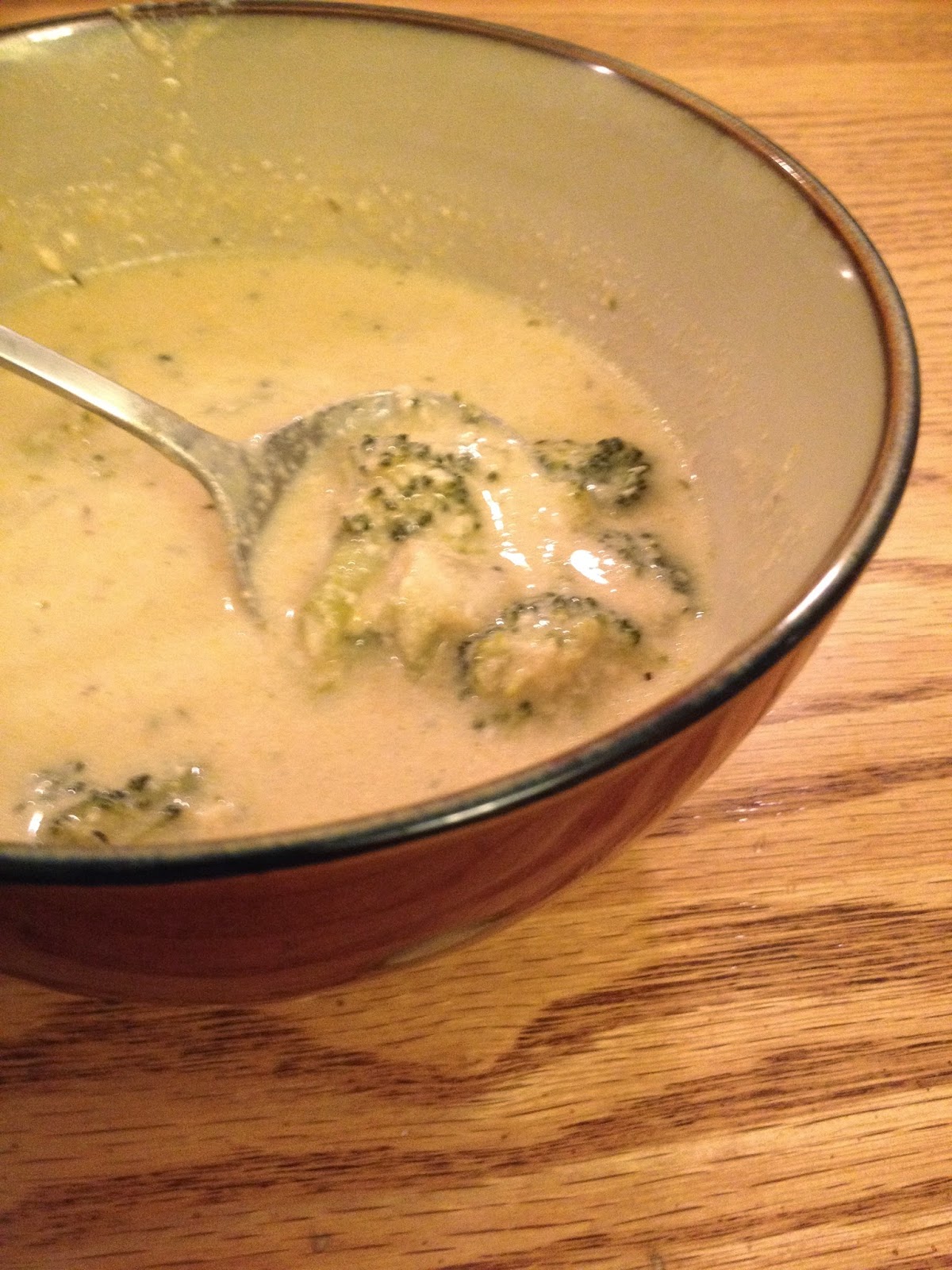 Back to blogging... apparently it's been more than a year since I put up a post. So, here I go diving back in with a Slow Cooker Broccoli Cheese Soup which turned out way better than I expected. I'm currently living in a small appartment with two industrial ovens, but no stove. So I've been getting to know my slow cooker and electric frying pan very well. This has so far been my first slow cooker success. I found the recipe on Pinterest.

2 cloves minced garlic
6 tbsp flour
Salt and pepper (to taste, I don't add much of either)
2 cans evaporated milk (370 ml each)
5 cups broth (chicken or veggie broth, I used low-sodium chicken broth)
5 cups broccoli florets, diced into small-ish pieces (This was about 4 broccoli crowns for me)
1/4 tsp dried thyme
1/2 cup half and half cream (the original recipe called for heavy cream, but half and half turned out fine for me)
2 cups shredded cheddar cheese
1/4 cup parmesean cheese 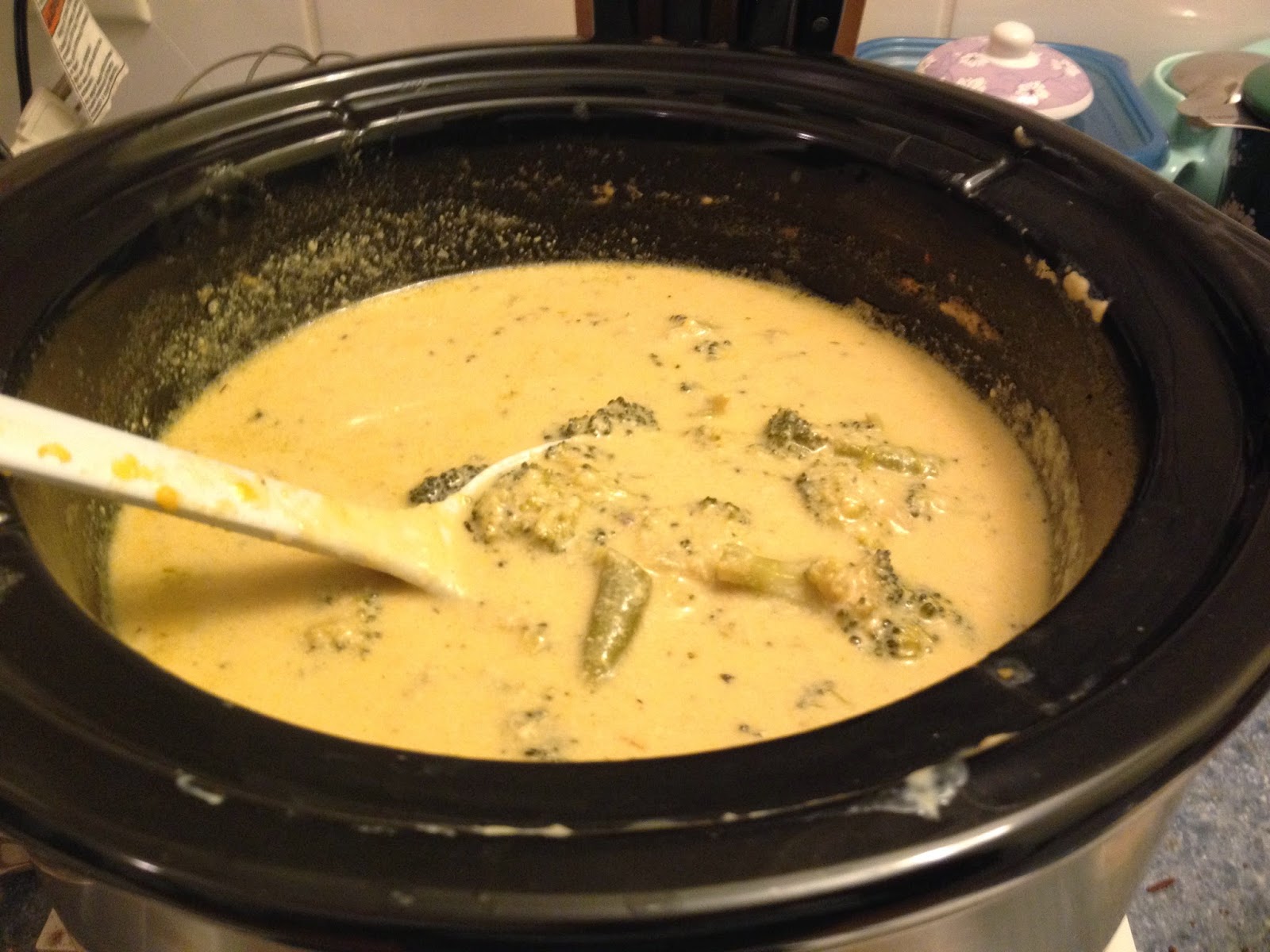 Melt butter. Fry onions in butter until they are softened and clear. Whisk in garlic, flour and salt & pepper. Slowly whisk in the evaporated milk and continue stirring constantly until it starts to thicken. Remove from heat. Pour into a slow cooker, then stir in the broccoli, broth and thyme. Cook on High 2.5-3 hours or on Low for 6 hours (I cooked it on Low for a little over 6 hours) Switch slow cooker to Warm or Off depending on how soon you are going to eat, then stir in the cream, cheddar cheese and parmesean cheese. Add more salt and pepper if you'd like and then serve hot with bread or crackers. It made about 8 decently sized bowls,  so I don't have to cook again for the rest of the week!

Overall, this recipe turned out very well but I wasn't really able to get a decent picture of it. Its thick and creamy, very cheesy and has plenty of broccoli in it. In the future I might play around with the spices that are in it, taking ideas from other broccoli-cheese soup recipes I've found.
Posted by TheSweetEngineer at 9:17 PM No comments:

This year I decided to be slightly more traditional with my gingerbread project. I made a Gingerbread train complete with Engine, Coal Car, Logging Car, Freight Car and Caboose. 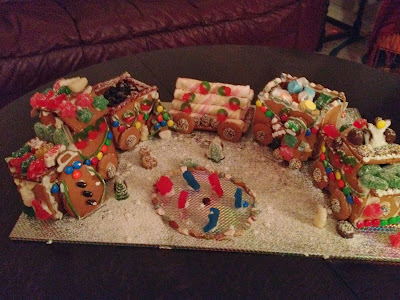 The whole train! And a little skating rink full of hockey players. 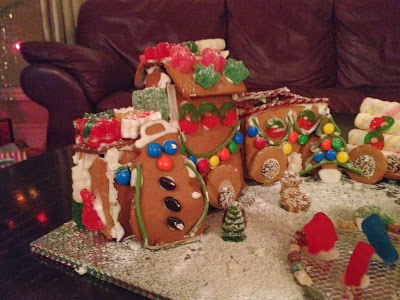 The train passes a snowman. 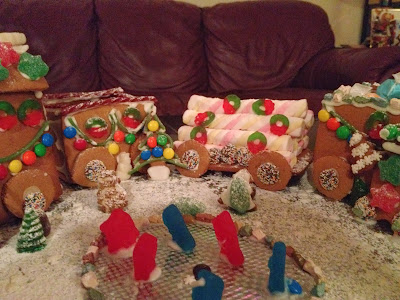 The 'logs' are marshmallow sticks, strawberry flavoured ones. 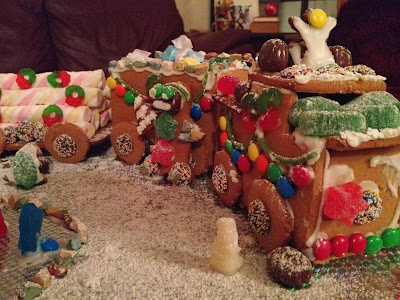 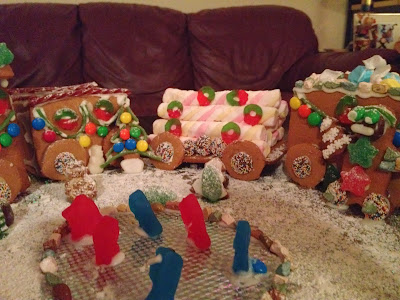 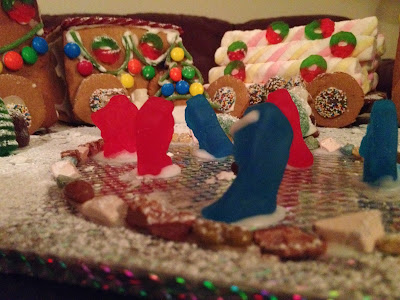 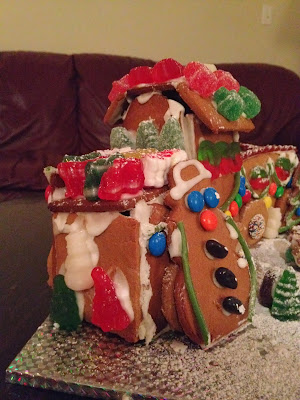 The engine working hard at the front of the train. 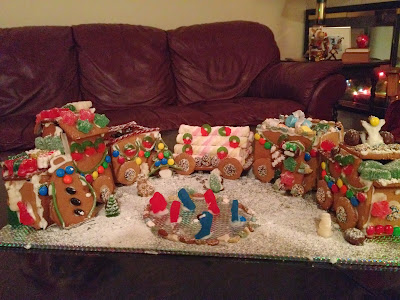 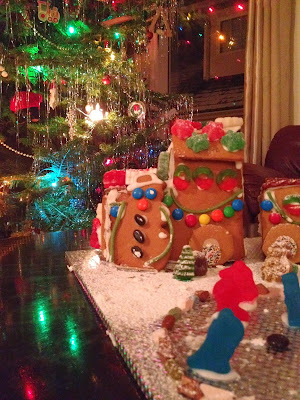 Merry Christmas!
Posted by TheSweetEngineer at 9:43 PM No comments: 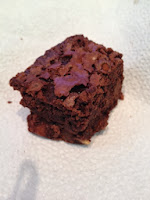 This is a truly amazing brownie recipe. Very rich and chocolatey. I've been meaning to post the recipe for a while but I keep forgetting. It kind of has weird measurements...

Preheat oven to 350. Line a 9x13 pan with parchment paper and then spray with PAM. In a saucepan melt together butter and sugar, until butter is completely melted. Allow to cool slightly, then transfer to mixing bowl. Beat in eggs, one at a time. Stir in vanilla. Add flour, cocoa and salt. Stir gently until well incorporated. Stir in chocolate chips and nuts. Bake for 35 min. Cool completely before cutting.

Posted by TheSweetEngineer at 12:31 PM No comments: