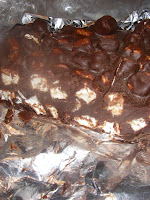 My brother and I were trying to figure out something to make with the bad of mini-marshmallows in the cupboard and we started discussing these treats known only as - those things with the rainbow marshmallows that we always had at potlucks. We both remembered them as being rainbow mini marshmallows covered in some sort of goo, which I remembered consisting of peanut butter and butterscotch and he remembered as including chocolate as well.

So, armed only with childhood memories, we went hunting. And we found this...

Okay, so we realized why these are brought to potlucks - because one or two is tasty but anymore gets a little much. So I don't know if I'll make them again.
Posted by TheSweetEngineer at 6:27 PM No comments: