This past week we had a combination celebration for my parent's 25th wedding anniversary, my Dad's 50th birthday and my brothers 16th birthday, so naturally I had to make a cake.

So I decided on a three tiered monstrosity with one tier representing each event. Unfortunately in all of the insanity of the party this is the only picture I have of just the cake. 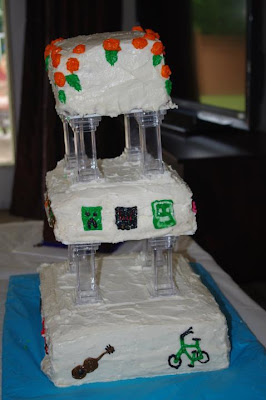 The top tier is supposed to be a replica of my parent's wedding cake. The second tier is characters from Minecraft and on the other side there is an illustration of the Angry Birds game. The bottom is guitars and bicycles for my dad.

Overall I was not happy with this cake. As you can see the second tier was not exactly structurally stable, (hey, I'm an Electrical, not a Civil) which meant that the top tier didn't stay on for much longer than it took for a few pictures. Then we took it off to prevent it from falling on the floor.

Also, I wasn't really impressed with my piping job, although the front of the cake (which I don't have a good picture of) looked a lot better than this side. And I just was overall not happy with this project.

However, I also made another cake for a family friend who turns 50 the day before my dad, and I was quite happy with how it turned out! 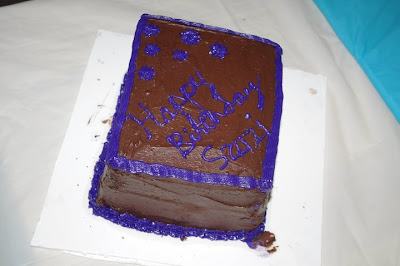 Well... except for the corner where I squished the icing when I was trying to put a lid over it...
Posted by TheSweetEngineer at 9:26 PM No comments: 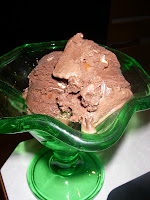 I haven't posted in ages... and I can't really say I've been busy either, I've just been playing way to much Minecraft. But I've also been creating some tasty creations, and then forgetting to photograph them. Anyway, one of the things I've been making a lot of lately is ice cream. I was given and ice cream maker for my birthday and I love it. This is my favourite recipe so far, its a chocolate base which you can then turn into whatever you like!

1 can sweetened condensed milk
1/2 cup cocoa
2 cups whipping/heavy cream
1 cup light cream (Creamo, or half & half)
1 tbsp vanilla
Whatever mix-ins you like! (I've done rocky road, which is marshmallows, peanuts and chocolate chips and also caramel-pecan, which is pecans and caramel sauce)

Mix together sweetened condensed milk and cocoa in a saucepan. Cook over low heat until smooth and slightly thickened. Allow to cool slightly. In another bowl, combine whipping cream, light cream and vanilla. Stir in cocoa mixture until well combined, this works best if you whisk it in, or if you wait a few minutes so that most of it can dissolve into the mixture and then stir in the rest. Chill for several hours until cold. Then freeze in ice cream maker using manufacturer's directions. Mix in your extras according to the directions for your ice cream maker.

Pretty much, this is the best ice cream I've ever tasted. Also, the recipe is super flexible and so you could make a ton of different flavours from the same chocolate base!
Posted by TheSweetEngineer at 6:08 AM No comments: