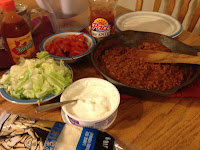 I'm currently sitting in the Vancouver Airport waiting for a flight to Germany, followed by a flight to India! I realized I hadn't posted here in a long time, so I figured I would post one of the many recipes that I have been accumulating but not posting recently.

I moved out on my own in September, well not really on my own, I have two roommates. Super awesome girls who I've known for several years. We've decided to take turns cooking dinner a few nights a week, and so my cooking repitoire is slowly expanding.

Here is one of our favourite recipes: Tacos!

All ingredients can be adjusted as you like. These are just guestimates on my part because I generally follow the 'shake, shake, shake... meh, looks right' method of cooking. Which so far has been working for me!

Cook the ground beef until browned. Add the onions and garlic and cook until the onions are clear. Pour in the can of tomato sauce and stir. Add the cumin, chili powder and salt and pepper. (And hot sauce) Stir these in well. Add more if you like. Cover and simmer the mixture for about 15-20 min, until the tomato sauce has been mostly absorbed/boiled off. Stir occasionally while it simmers.Once the meat has thickened, serve on Taco shells (hard or soft, as you prefer) with sour cream, salsa, tomatoes, lettuce, cheese and a whatever else you like on your tacos!

I'll add a picture to this post soon... once I'm not trying to use airport WiFI...

EDIT: I've now added a picture. Also, my mother informed me that she also uses a packet of beef bovril in the mix, I think just before she adds the tomato sauce. But I've never used this... so I'm not sure. (I don't even own any beef bovril)
Posted by TheSweetEngineer at 11:19 AM No comments: